But They’re A SF Publisher!!

But They’re A SF Publisher!!

I’ve always made the assumption (presumption, probably) that any publishing company in the business of publishing science fiction is likely ahead of the curve when it comes to technology.

Afterall, Baen Books (and I believe Tor, too) have taken the stance that DRM protection on ebooks is harmful to the industry overall, and don’t put DRM on their titles (and I love ’em for it!).

Most of the on-line SF magazines provide RSS feeds, still, and make it easy to find them. They allow subscriptions, and channels and all the tech perks a subscriber could want.

I’ve bought my paper copies from the grocery store for years, but I’ve always itched to get the magazine electronically. Then my hand was forced about six months ago, when the grocery stores here in my hometown stopped carrying Asimov‘s.

I welcomed the interruption, as a good excuse to take the time to subscribe electronically…and that’s where I ran into a large, painful wall. A virtual wall, actually.

As I’m in Canada, I cannot subscribe electronically. It’s print or nothing.

I’ve spent a few weeks mulling this over, highly irritated that a company that likes looking toward the (fictional) future can’t manage to deliver e-copies across an international border. It seems remarkably short-sighted to me.

I grumpily subscribed for a print version for a year, but I’m wondering in the back of my mind whether I will continue the subscription after the year runs out, as I genuinely dislike reading print…and don’t get me started on the paper and the toxic inks and more…

Do you subscribe to electronic magazines wherever you can? Or are you still reading print editions? Which of your favourite magazines offers electronic-only subscriptions?

Today is the release day for But Now I See, which is book 1.1 of The Indigo Files. 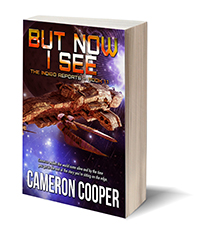 A lethal cat and mouse game.

To pay off a long-standing debt, Tatiana Wang, captain of the freeship Hathaway, takes aboard a politically high-risk passenger. When the Hathaway is caught by the Karassian military’s flagship, led by the biocomp captain Yishmeray, “high risk” becomes “deadly.”

The But Now I See novelette is part of the Indigo Reports space opera series by award-winning SF author Cameron Cooper.

Praise for But Now I See:

Excitement PLUS! – we are immediately drawn into a high drama situation with some very interesting characters.

It’s wonderful to read the conclusion of this little story: the great importance of the family for all humans, whether they live on Earth or in another dimension.

This is a fast paced short story which sets the stage for Bellona’s future exploits. Definitely worth the read. This is a great series.